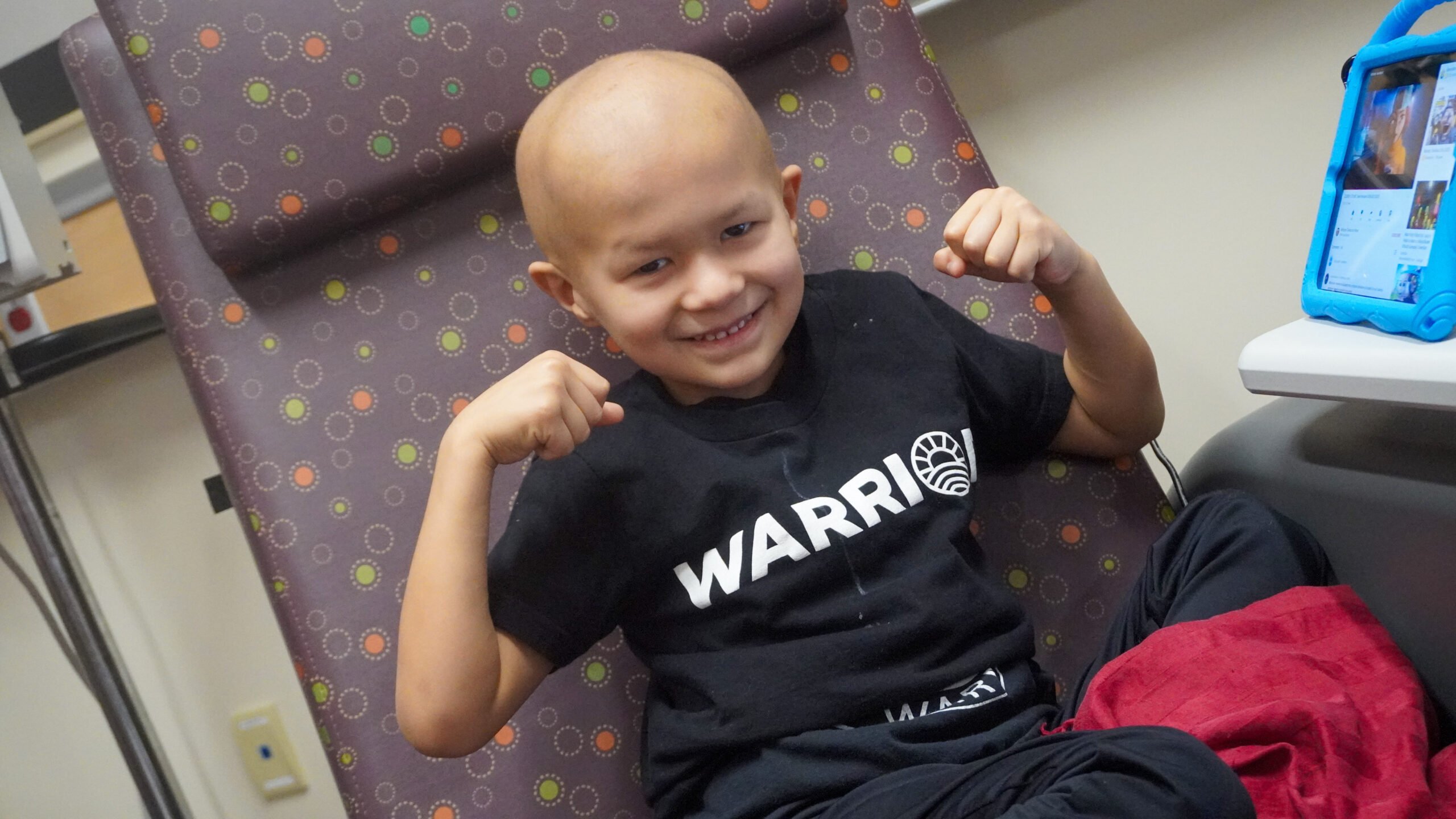 Warrior [wawr-ee-er] noun: a person who shows or has shown great vigor or courage.

Synonyms include fighter, soldier and Andre.

There’s never been a person more deserving of their name than Andre Sanders.

Not only does his name literally mean warrior, but he is one, right down to his core.

At 4 years old, he’s pure dynamite. When Andre walks into the room, you know he’s there. While he stands at only 3 feet, 10 inches tall, he packs a punch with a larger-than-life personality that lights up any room.

“He loves out loud,” said his dad, Rich Sanders. “He’s very thoughtful and very kind. He always asks, ‘So, how was your day?’ He has a conversation like an adult. I don’t even ask my wife these questions sometimes! But he’s a constant reminder to me to do certain things.”

Despite being diagnosed with a Wilms tumor, Andre approaches his treatment the same way he approaches everything else in life – with determination, the drive to overcome and all the love in the world.

Rich and his wife, Alexandra, decided that once Andre was old enough (he’s the youngest of two), the family would move to Florida, which is where Rich grew up. After many trips down south, and with both Andre and brother Demeris John (DJ) loving Florida living, the family decided to make it permanent.

They started getting everything in order. For four months, Rich went back and forth between Buffalo and Florida; everything seemed to be working out.

Then came the big move – August 4, 2019. The family drove down to Florida and settled in. They had job offers and a good living situation, and were adjusting well to their new life.

But Hurricane Dorian, which was projected to hit the neighboring town on September 3, 2019, had other plans.

Because Rich lived through Hurricane Andrew in 1992, he was determined to get his family away from the powerful storm. So they evacuated to Atlanta.

As a distraction, the family visited the University of Georgia to see the football stadium. Rich, Andre and DJ are all sports fans, so it’s something the Sanders family likes to do together. During their visit, Andre began to feel sick. Rich and Alexandra didn’t think too much of it because Rich and DJ had been sick a few days prior with flu-like symptoms.

The first night in Atlanta, Andre woke from his sleep with vomiting and complained of stomach pain. Something did not seem right, so Alexandra took Dre to the local hospital and was told that he likely had a stomach virus. The next day, Andre still complained of stomach pain, so Alexandra took him to a different hospital. The work-up suggested appendicitis so he was transferred to Children’s Hospital of Atlanta.

They got Dre ready for what’s supposed to be a 20 minute surgery to remove his appendix. After 10 minutes, the doctor came back out. Upon seeing the look on his face, Rich could tell something was wrong.

He told Rich and Alexandra to sit down. And they heard the words no parent ever wants to hear.

“I found a tumor on his kidney.”

The parents were told they would be admitted to the oncology unit.

“Everything starts to hit you,” Rich said.

“Is it cancer? They can’t answer that. So you have to wait until the next day to get a scan. And it’s a nightmare. You start thinking about everything else.”

The family knew they had to start planning, which meant moving back to Buffalo so Andre could receive whatever treatment he needed at Roswell Park Comprehensive Cancer Center.

The Journey Back to Buffalo

The next day, Andre’s scan revealed he had a tumor on his left kidney, which was thought to be a Wilms tumor. It was so close to rupturing that he had to have surgery to remove both the tumor and his kidney right away.  After surgery, Andre experienced several post-operative complications, including fluid in his lung.  This kept him in the hospital longer than expected.

The Sanders family were informed prior to discharge that he was stage 3, with favorable pathology, and with one positive lymph node.  They were told to expect radiation to his left flank and six months of chemotherapy upon their return to Buffalo.  He was finally discharged on September 14, and the family began their journey back to Buffalo.

Thankfully, Andre was cleared to fly, so he flew to Western New York with Alexandra and DJ. Rich drove back with their dog.

A few days later, they were at Roswell Park, where Dr. Denise Rokitka laid everything out for them. They started with a CT scan, which showed that all the fluid in Andre’s lungs was gone. But it also revealed two nodules in his chest. Once again, plans changed.

Andre started treatment in September 2019, and he’s handling it like a pro. Even when his hair started to fall out.

“He said, ‘I am going to be bald like my dad! It’s no big deal,’” Rich said. “Andre takes everything in stride.” 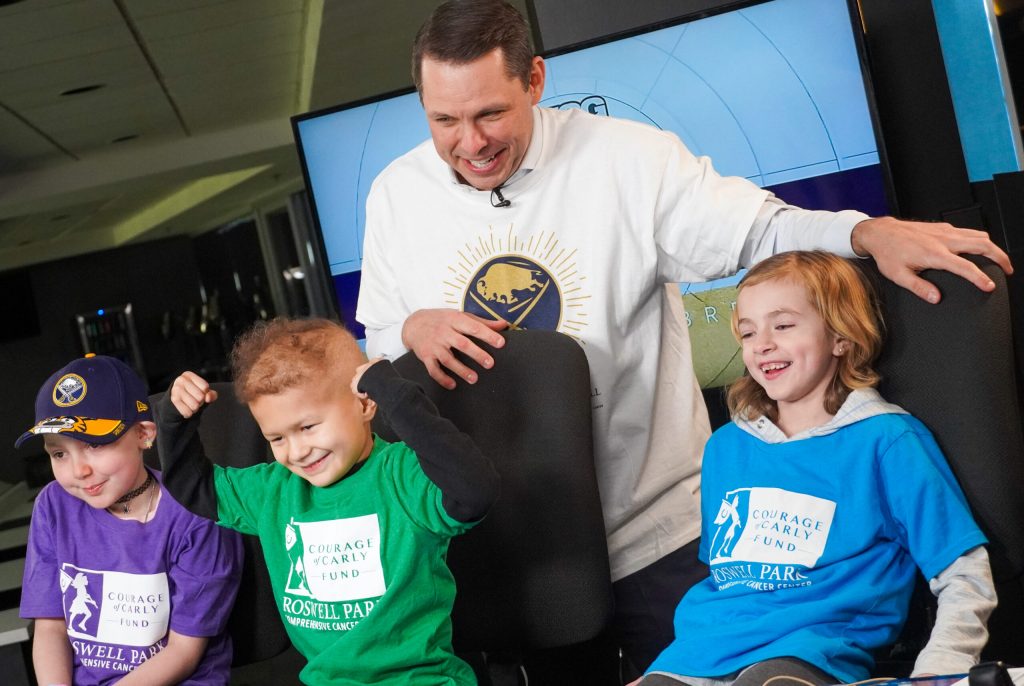 Andre will be joining Bella and Adriana on March 5 to shave Marty Biron and Dan Dunleavy’s heads as they go Bald for Bucks. To Andre and his family, their support means everything.

“It’s great to have genuine people in this city that care and in this organization that actually do something that impacts people’s lives,” Rich said.

“Marty has a genuine heart for children. Maybe that has something to do with being a father. But there are those people that are genuine, no matter who they are. That’s Marty.

“Duffer is another amazing guy. I talk to him and I feel like I’ve known him for 20 years, and I’ve only had three conversations with him. He reminds me of an old friend that I talk to, and I don’t even know him like that.”

As a father, watching his son go through cancer is hard, but Andre and the rest of Rich’s family can handle anything.

“I grew up and was in environments where you’re taught to suppress your emotions. But with this, it’s the ultimate weak spot for me. I try to suppress as much as I can, but there’ll be times I am driving and it just hits me,” Rich said.

“There’s so much I have to keep doing to keep him and DJ not entrenched in this. It’s what has to happen. I was in a Target, and one of Andre’s favorite songs came on. I had to go in the corner near the Christmas trees and sob.”

But despite what the Sanders family is going through, they make sure to fill their house with one very important thing – love.

“We express it every day – in speech and in hugs. We are very expressive because my wife didn’t have that growing up, and I didn’t either. We want to raise our household like that.”

And it’s safe to say those expressions of love are paying off.

“Andre will say, ‘I love you’ randomly. When I come home at night, he essentially runs to the door and says, ‘Dad’s home!’”

And what’s Rich’s hope for Andre in the future?

“Never forget what he’s overcome and how he overcame it. We all go through things. And it’s one thing to just get through them. But he has taken it to a whole new level. He rose to the occasion.

“I want to remind of him of the tough times and of his strength. He can handle anything. He can do it, and not only get through it, but impact and change other people. I want him to stay true to that.”

Support Marty and Dan
PrevPreviousGet to Know Bella, The Girl Who Started It All
NextMake A Difference From Home by Goin’ Bald for BucksNext